Tasked by studio executives with finding the next great screen siren, visionary Hollywood director Josef von Sternberg joined forces with rising German actor Marlene Dietrich, kicking off what would become one of the most legendary partnerships in cinema history. Over the course of six films produced by Paramount in the 1930s, the pair refined their shared fantasy of pleasure, beauty, and excess. Dietrich’s coolly transgressive mystique was a perfect match for the provocative roles von Sternberg cast her in—including a sultry chanteuse, a cunning spy, and the hedonistic Catherine the Great—and the filmmaker captured her allure with chiaroscuro lighting and opulent design, conjuring fever-dream visions of exotic settings from Morocco to Shanghai. Suffused with frank sexuality and worldly irony, these deliriously entertaining masterpieces are landmarks of cinematic artifice. 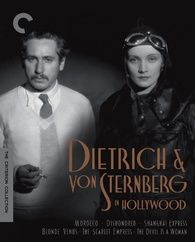